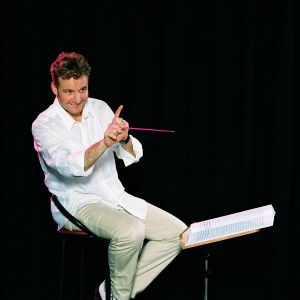 After training as a classical musician Philippe Béran chose a highly unconventional and innovative career path. Born in Geneva in 1962, he studied both science and music simultaneously. He graduated with First Prize in clarinet from the Geneva Conservatoire and was awarded First Prize in conducting at the Conservatoire National de Musique de Paris. He also obtained a degree in theoretical physics at Geneva University and for ten years taught maths, physics and music to college students. When Philippe Béran (by then married with four children) decided to devote himself exlusively to music and conducting, his privileged relationship with young audiences became one of his specialities.

Keen to communicate his passion and deep love of music to the new generation Philippe Béran relies on enthusiasm: his own enthusiasm, which he instantly relays to his audience. Not for him the traditional concert formula which dating back 250 years and the rather stiff-necked aspect of certain performances which are only attended by informed music-lovers. Instead, he aims to bring music to the “musically unaware”, and has developed an original and lively concert format where the audience is not kept at a distance but invited to participate. These performances, shorter than traditional concerts and with commentated intervals, allow the audience to discover the symphonic repertoire in a simple and humorous way, in an atmosphere of sharing and complicity.

This formula was an instant success and every year 12000 children attend these concerts, which are regularly sold out, and which are conducted and commentated by Philippe Béran and performed by the Orchestre de la Suisse Romande. The short version of Mozart’s Magic Flute, performed in the spring of 2011 at the Grand Théâtre de Genève, was so successful that it had to be re-programmed in the autumn. In December 2011 there were ten successive full houses for the showing of Charlie Chaplin’s film “Modern Times” at Victoria Hall. A real challenge for the OSR conductor, as the music and images must be perfectly synchonised : “99% successful, not good enough!” as our man in Geneva likes to say, a perfectionist through and through.  Philippe Béran is world specialist of “movie -concerts”,  in particular Chaplin’s movies

In addition to being director of educational activities at the Orchestre de la Suisse Romande and the Lausanne Chamber Orchestra from 2002 to 2011, Philippe Béran is also director of the Geneva College Orchestra. This orchestra of very good level consists of 100 college students, aged 14 to 19, and covers all repertoires: symponic, choral, ballet, opera , film music. Each year the College Orchestra gives approximately fifteen concerts and tours regularly – most recently in Toscany and in China!

Music and pleasure go hand in hand for Philippe Béran whose joie de vivre and energy are part and parcel of his personality, and it is with this outlook on life that he has taught orchestra conducting at the la Haute Ecole de Musique de Lausanne since 2009.

On a more classical note Philippe Béran has acquired a reputation as a director of opera (since 2002 he is regularly invited by the Grand Théâtre de Genève and Lausanne Opera), but above all as director of ballet, his favourite genre. He has worked internationally with many of the most prestigious opera houses. In December 2007 he gave nine performances of “Nutcracker Suite” at the Lincoln Center with the New York City Ballet. In May 2008 he inaugurated the new Beijing Opera with the Ballet national de l’Opéra de Paris and the Beijing Central Ballet Symphony Orchestra (Paquita). Since 2009 he has also been regularly invited by the Swedish Royal Opera in Stockholm and will make his debut this season at the National Opera of Finland.